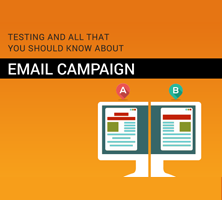 Also known as split testing or bucket testing is a method to find out that between two versions of a website which one is performing better. There are two variants taken from the website and compared. The comparison is done on the basis of the statistics of the engagement. Both the variants have similar users. The one with more conversion rate wins. We have a good example here that is Mailchimp. It is the most useful platform for email marketing services.

Why should be A/B Testing done?

Generally, A/B testing is done for the purpose of optimization and validation. While in optimization it is used to increase the conversion rates when a Pay per Click campaign is running after a certain period of time whereas validation is done to generate a competition among two variables to get best results. To utilizing more from the existing traffic A/B testing is done. The reason being it helps in lead generation, sales, and revenue.

What is tested and impacts of A/B testing?

Whatever effects the user behavior is tested like the Headlines, Sub-headlines, Paragraph Text, Testimonials, Call to Action text, Call to Action Button, Links, Images, etc. sometimes the marketers have a fear that the variants ranking in the content might reduce due the competition. But it also makes sure that the content on the website is appealing to the user. So if your content is not copied, it will pass the A/B test.

How do A/B Testing Campaigns work?

Firstly you have to choose the variable type among Subject line, name, Content, or Send time. Then create up to variations. Combinations are made after that and given to different sets of subscribers simultaneously. One subscriber gets one set of a variable from the campaign. The stats are tracked and the winner is chosen, but the results are not shown individually.

The winner can be selected by using the stats of the open rate, click rate or the total revenue. Whichever has the highest count can be chosen as the winner. This was an automated way of doing the A/B testing. It can be done manually also by seeing the stats and selecting the valuable one.

But before doing the A/B testing things one should know certain things. There are many “what’s” and “why’s” when it comes to the conversion rates. For instance,

Have you defined your business objectives?

Companies often lack behind in using the web analytics because there are no such objectives to understand or measure.

Goals are to be prioritized in the simplest way possible. One should know as to what is the requirement for the website to reach out to the correct audience. Google analytics assists you to see the defined data.

The name says all. What is high and what is low can be measured only if a business has a goal. When metrics are good, it helps boost the KPI of your business.

Every element in your business has a target be it the sales, ROI, or email marketing. Every KPI should have a defined target. Its bits of help improve the conversion rate. When targets are not complete you will surely work hard on achieving them.

A/B testing is generally a good choice for faster results. Because the changes happening between pages are evident, choosing the most effective one is easier. When less traffic on the site, then also A/B testing is helpful.

No matter how well your email marketing is doing, but with no testing and targets, you are letting your competitors go ahead of you. Not all tests will be successful but some will surely be. Hence constant tracking and optimizing is very important if one doesn’t want to lag behind.